Historically, there has been a tradition that supposedly seeks to improve the appearance of pets: cut off their ears and tail. And although according to the experts it is an increasingly disused practice, it still persists in some cases.

Dogs of breeds like boxer, Doberman, Rottweiler, pitbull, schnauzer, pincher, terrier, chihuahua and poodle have been some which, traditionally, their owners have sent them to cut the ears and tail. 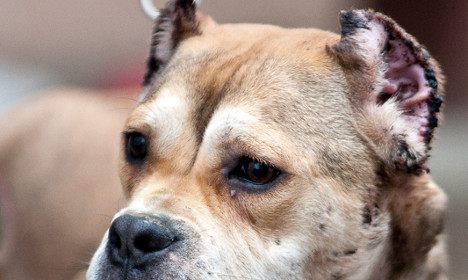 And that is nothing but a mutilation.

This is assured by the veterinary doctor Jorge Gallego, professor of emergencies and coordinator of internal medicine of small animals of the University of Antioquia, who reiterates that this type of surgical procedures for aesthetic purposes is considered a mutilation. And all mutilation indicates violence and abuse, says the expert.

“Unfortunately, in Colombia, there is not yet a law that protects animals from this cruel practice,” Gallego explains and clarifies that in European countries it is prohibited. For him, the only thing that can be done in our country is to create awareness among owners and veterinarians, especially from the university faculties. Because many of these professionals end up an offering and performing these surgeries in their establishments as one more service of their business.

And many owners go to places of dubious reputation and whereby malpractice – lack of hygiene, infected instruments – the animal could even lose its life.

Carolina Alaguna, the veterinary ethologist and teacher of the Uniagraria, explains that these operations cause a lot of pain to the animals and several later complications.

“Dogs usually communicate through body language. Not only with humans but with other dogs. When they are alert, scared, submissive or happy, the posture of their ears and tails expresses how they are feeling, “warns the specialist explaining the role of these body parts in dogs.

This is why we see that they hide the tail between their legs when they are afraid, they form a kind of question mark if they are on guard and they move it energetically to show their happiness and happiness. In addition, the tail is composed of bones (caudal vertebrae) that have other associated tissues. Something similar happens with the ears.

But this theme transcends the aesthetic and animal emotions. The tail is the continuation of the spine and an important element for its balance. Running, turning, jumping and moving are movements in which the animal needs its tail. And when cutting it, in addition, cartilages, nerves, blood vessels and other tissues are cut, in addition to the skin. Which means that the dog suffers unnecessary pain and loses basic functions of its anatomy.

“When your tail is cut, for example, you also cut a series of muscles that you have in this area and you can trigger a complication. In the ears, the auricle is affected, which allows the dog to move its ears and adequately capture the sounds.It can also cause frequent otitis, “says specialist Carolina Alaguna.

“Removing a limb for aesthetics is not called amputation. Because amputating means removing a limb for health reasons; because the animal has bone cancer, for example, and in this way, it can stop its spread, “says veterinarian Jorge Gallego and clarifies that any surgery involves the risks of anesthesia.

Also, when subjecting the pet to these cuts, it also puts her at risk in the postoperative period, where an inadequate cleaning in the area of ​​the ears can create an accumulation of blood that could trigger an external otitis. And if the cut was badly done, the ear can remain with the fallen muscle.

Other pets that have also been victims are cats, which are operated so that they are left without nails and do not tear furniture or scratch people. This practice is called onychectomy.

“Cats not only remove their nails but their phalanges. This procedure is very cruel and it causes them great pain”, explains Alaguna.

“By doing this, you are not allowing yourself a natural behavior and you can harm your behavior. In the case of cats, part of their behavior is their territoriality. With their glands, they expel pheromones when they need it. ”
They, with their nails, are marking their territory and this is very important for their life cycle. That is why you should put scrapers and elements that can scratch but do not damage.

Veterinarian Daniel Bohorquez shares the same argument: this practice is unnecessary and cruel. “The animal can become infected, or cause other complications. To remove the claws in cats is to remove part of their being. The essence of a feline is its claws and teeth. It’s taking away half of their being, they need their nails to feel safe, to climb, to defend themselves, to be feline, “concludes the expert.

View all posts by Harry william